I’ve been thinking about two rape myths today, and what they mean for our understanding of rape in and out of the courtroom.

The first myth is the idea that there is a ‘correct’ way to respond to being attacked, and that response is to scream. And the second is that a if the jury acquits a man accused of rape, the accuser is immediately guilty of the crime of ‘false accusation’ or perverting the course of justice – despite not being found guilty in the law courts.

The ‘she didn’t scream’ myth is a persistent one. It’s the belief that a woman or girl would always scream or fight back if they were attacked, and that if they didn’t scream or fight back, then there was no attack. It is based on the idea that ‘rape is the worst thing that can happen to a woman, and therefore a woman would do everything in her power to stop it’. Responding to this statement, CWASU writes on their rape myths page:

Many women assess their attacker, and make moment by moment decisions about their survival. In many circumstances, women being sexually assaulted fear for their lives. When rapists have a weapon, or threaten the victim, most will strategise for their own survival by not unduly alarming or aggravating their attacker; they follow his instructions in order to stay alive, and this may include not making a noise or resisting. Being raped is not worse than being dead or permanently injured - opting to submit is a rational decision, made in a context where there are very few choices or options.

Some women may scream and fight. Some women may freeze, from fear or because they believe it may keep them safe from additional, physical violence. No one should apply a moral judgement to either response. No one should tell a woman that she responded ‘the wrong way’. And yet, we hear this all the time. Women who scream may find themselves told they ‘put themselves in more danger’. Women who freeze are told they ‘should have fought back’.

One of the problems I see here is our skewed understanding of consent. We see consent as the ‘absence of a no’, not the presence of an ‘enthusiastic yes’. Freezing and not screaming is not an indication of consent. Consent does not rely on silence, and the fact we continue to believe it does leads to the rape myth that if she didn’t vocalise no, she must have meant yes. This myth then leads to women blaming themselves for not saying no.

When I interviewed TV writer Emilia di Girolamo about this issue, she said:

Freezing and silence is not an indicator that no assault happened. It is a survival tactic and it is a normal response to being attacked. It should be respected and understood to be so.

Every time we repeat the myth that there is a correct way to respond to rape, then we are telling women who don’t respond that way that they are to blame, that they were in the wrong. As with every single rape myth out there, it moves the focus from the perpetrator’s behaviour onto the woman’s. It says that it is up to the victim to behave in an approved manner, and that her response is then ‘proof’ of her innocence or guilt. We ignore the responsibility of the perpetrator not to rape, we ignore that it is up to him to prove that the rape didn’t take place. It is his behaviour that should be under scrutiny and yet time and time again we return to the woman’s actions.

The CPS has started to challenge the defence that if a woman didn’t behave in a pre-approved manner, then it wasn’t rape. In their guidelines on rape myths, they write:

If she didn’t scream, fight or get injured, it wasn’t rape.

• victims in rape situations are often legitimately afraid of being killed or seriously injured and so co-operate with the rapist to save their lives;
• the victims perception of threat influences their behaviour;
• rapists use many manipulative techniques to intimidate and coerce their victims;
• victims in a rape situations often become physically paralysed with terror or shock and are unable to move or fight; and
• non-consensual intercourse doesn't always leave visible signs on the body or the genitals.

The CPS is right. Accusing a woman of not responding in the ‘correct’ way to rape invalidates the victim, brings back trauma and tells them that they shouldn’t report because no one will believe them or respect their experience. And so the terrible cycle continues where reporting rates stay low, and those who do report risk being disbelieved, and the rape myths infiltrate the public imagination and the conviction rate stays low.

That’s what makes this myth so dangerous.

The second myth I want to talk about is on how when a man is found not guilty of rape, the woman is found guilty in the court of public opinion of making a false accusation.

Making a false accusation of rape is a serious crime which results in a jail term if an individual is found guilty. It is perverting the course of justice.

If you believe in the principle that everyone is innocent before proven guilty, then you MUST extend that right to women who make a rape complaint too. They are innocent of the crime of making a false accusation unless the courts prove otherwise.

Here’s an infographic of false accusations against incidents of rape: 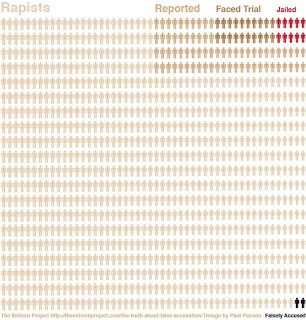 It really seems to confuse people, the idea that the principle of innocent before proven guilty applies to women who make rape complaints too.

Last night I was talking with a friend of mine about these rape myths. We said we both believe that in the future, perhaps in the next generation, we will look back at society today in horror. We will be horrified that we were a society that allowed rape to happen. We will be ashamed that our response to rape was to find ways to blame and accuse the victim. It will be as ridiculous and embarrassing as witch burning or other historical disgraces. Our grandchildren will look at us and ask how we dared to allow this, how we dared to tell a woman that she should have screamed, she should have said no, that she is guilty of a crime she hasn’t been convicted of because she made a rape complaint.

I believe this will happen because things are changing, and they are changing because of feminists. Two years ago, when a group of men group raped a 12 year old girl and they got out of jail on appeal because the judge said she was sexually experienced and wanted sex, there was silence. This year, when a lawyer called a 13 year old rape survivor ‘predatory’ and the judge gave her rapist ridiculously low sentence, David Cameron got involved and action was taken against the lawyer. Feminists didn’t get any credit despite Everyday Victim Blaming leading the march on this case, but at least there was uproar. At least people said it wasn’t ok to victim blame a child.

Things are changing. Feminists are leading this change. We are having an impact. We are facing a helluva backlash as a result. But the day when we are ashamed of our attitude to rape and survivors is coming. It is coming.