So. For me the story of sisterhood and the importance of women-only organising is a story of moving from what might be called ‘liberal’ feminism to a more radical feminist outlook.

When I started out in feminism, organising Ladyfest 2007 and then, not long after, taking over the stewardship of the Bristol Feminist Network, I believed in the importance of including men in my feminist organising. After all, I reasoned, men can be feminists too (a belief I now question) and patriarchy hurts men too. So why shouldn’t men come along, contribute, share, and listen? Why shouldn’t men be present?

I do still have sympathy with this outlook in part. I do think that patriarchy hurts men too, and I do believe that men need to be allies to the feminist movement. I believe this because in order to achieve the goals of the women’s liberation movement, men need to change. They need to give up some power and privilege. And for men to do this, they need to see why it is necessary. Feminism is part of the why. I also believe that in many ways, patriarchy does hurt men too. It preaches a damaging ideal of masculinity that celebrates violence and machismo, and leaves men and boys feeling hurt and confused. A good example of this is the exposure of very young men and boys to pornography that glamorises violence against women – telling men that the only way to be sexual is to be violent and aggressive. This message helps no one.

When I ran the Bristol Feminist Network, very few men attended our meetings. The vast, vast majority of meetings, although open to men, were women only by default. And it is in these meetings where I discovered the beauty of sisterhood.

Sisterhood is not about liking women, it’s not about being best friends with every woman you meet. I met some women in these meetings who I couldn’t stand! Instead, sisterhood is about creating a space or a world where women’s voices are heard, listened to – really listened to – and respected.

Now, sometimes men would come to the meetings. Mostly these men were lovely. Kind, sensitive, “feminist” – but also filled with male privilege. And I started to realise how different the dynamic was when men were present. Collectively, the women in the room listened to men more. We privileged their voices. We looked to them to be the voice of wisdom and sense.

This was not something these men consciously demanded from us – far from it. But it was something that occurred because as women, we have been raised from day one to defer to men. We have been educated to put men’s voices first. And it is hard to erase 25 years of patriarchal training to shut up and listen to him, even when you are in a feminist meeting.

That was my first lesson in why we needed women only space. The second was from a story my friend told me about a meeting she had to go to with a cabinet minister, to talk about women’s rights in conflict zones. The minister arranged for the meeting to take place in his “club”. Yes, a male only club, like the ones you read about in Georgette Heyer novels. My friend had to get permission to enter.

It was a lightbulb moment for me. For years, I had heard people tell me that women only feminist space was exclusive and excluded men. But in one flash, I realised that the centres of power in this country – the boys schools, the bullgindon club, the golf clubs, the gentleman’s clubs, they were male only spaces that consciously and legally excluded women. The places where the decisions were made, where the men talked, where the men made connections, where the men ruled – all of these were set up to deliberately exclude women. And no one was really talking about it. Whereas men were up in arms at women daring to come together in women only spaces to talk about rape, they were strangely silent about men coming together in male only spaces to talk about laws around rape.

This is hugely important. If you want to speak to a cabinet minister about including women in conflict resolution in their own countries, as my friend was doing, and to have that meeting you have to go to a place that absolutely excludes women, something is very, very wrong.

Because women-only space is empowering – for all of those reasons of sisterhood I explained before. It’s empowering in the real, true sense of the word, because it creates a space where we have an equal and valued voice.

So that’s how I made the journey from mixed to women-only space. Since my light bulb moment, it’s one I’ve become more convinced by – having had the infuriating experience of being told by men who identify as feminists that I need to shut up, sit back, read more books, or being told ‘I don’t know what I’m talking about’. I need a space that is free from male privilege, where women can share their experiences and self-organise and be empowered.

Sisterhood has been the most important thing to me since becoming a feminist. As I said, sisterhood is not about liking every woman you meet. But it is absolutely about feeling that women’s voices can and must be heard. It is about recognising common experiences of oppression whilst valuing and talking about how intersectionality means that different women experience oppression differently. And it is about coming together, and creating our own, empowered spaces, having been locked out of the centres of power for so long.

After all, as Robin Morgan so wisely said, SISTERHOOD IS POWERFUL!!!!! 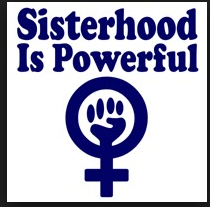