This week the latest figures on sexual violence were published. These figures come from the Home Office, the Office of National Statistics and the Ministry of Justice and cover England and Wales. So, as far as statistic go, these are pretty thorough.

What the statistics also tell us is that only 15% of these rapes are ever recorded and only 1070 of the reported rapes lead to a conviction. This was shockingly illustrated by an infographic on the front page of Friday’s Independent. 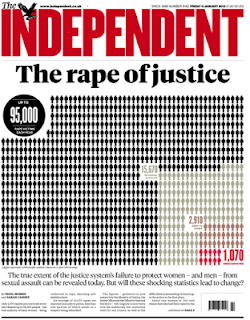 When you look at these statistics it reveals the true extent to which we live in a rape culture. It undermines the endless defences for rape and rape culture we have heard last year. The ‘it happens over there’, ‘it happened in the past’, ‘it happens in those communities’. Sexual assault and rape is a crime committed against one in five women in the UK right now. It is shockingly common. It is so common as to be commonplace. It’s not even newsworthy most of the time.

This has to end now. It has to stop. I feel ashamed to live in a society with people who rape women, men and children. I feel ashamed. I do not want to live in a society that allows men to rape with impunity. And the numbers show so clearly just how much we allow that to happen. This is the reason Unilad could write an article about how low rape reporting rates meant ‘pretty good odds’. If we as a society were better at dealing with rape, then firstly we wouldn’t have up to 95,000 rapes every year in the UK and we would have a conviction rate that matched the crime.

The survey revealed some of the reasons why the reporting rate for rape stays so stubbornly low. Women explained how they felt the police wouldn’t believe them, that they didn’t feel confident reporting, that it was a private matter. When we hear the editor of Newsnight say the evidence against Jimmy Savile was ‘just the women’, can we blame them? When we see Ched Evans getting awards and his defenders harassing his victim out of her home, can we blame them? When an alleged rape victim is named on Newsnight, or another is falsely reported as being a gold digger - who can blame any woman for not reporting a rape?  When we hear of an officer arrested for falsifying rape complaints, when a Judge convicts a rapist but tells his victim she let herself down badly, when another anti rape campaign tells women to cover up, stop drinking, stay home, when the average rape case takes months and then at the end of it the Judge might let your rapist go home for showing remorse  – who can seriously blame any woman for not wanting to report rape?

All of the cases bar one that I mention above happened in the UK. One happened in the US. This violence against women, this refusal to believe women or respect women’s bodily autonomy, it is happening here. It is happening today. Since the horrific rape and murder in Delhi I have heard a lot of people talk about how that awful crime says something about Indian culture and attitudes towards women, they say it wouldn’t happen here. Of course, there are lots of issues around violence against women that are unique to India, just how some of the VAWG issues we experience are unique to the UK. Many women have written about this far better than I can and there’s a good round up of those pieces here. But the fact remains. Violence against women and girls, a low reporting rate and a low conviction rate is a universal problem and what causes this violence is a problem whether it is found in Delhi or Sarajevo or New York or on our own doorsteps.

And call me a pessimist, but I think the actual statistics of sexual assault are higher than one in five, if, as the survey explains, we include unwanted sexual touching. I don’t know any woman that hasn’t been groped, grabbed, touched or pinched. But we’re told to put up with it. We’re not told that this behaviour counts as sexual assault. We’re told that it’s just what happens, that it’s just a fact of life. If you’re a woman and you go outside and someone grabs you or pinches you or pushes you against a wall and sticks their tongue down your throat then we’re told that there’s nothing you can do about that. It’s just something that happens.

I’m angry. And I am ashamed of a society that lets this happen. I’m angry and I’m saddened that another year goes by and we’re still seeing these numbers, these shocking and yet still unsurprising numbers.

But I am hopeful too. Because more and more I am seeing the women around me standing up to this bullshit. I am seeing the Everyday Sexism  project telling the world the truth about women’s lives. I’m seeing One Billion Rising and Reclaim the Night and protests in India and protests in Bristol and London and around the globe saying we won’t put up with this anymore. There is reason to feel despair at these figures, the printed stories that accompany them and the untold stories that we never hear about in the papers but hear from the women we know, the women around us. But there has to be hope too. I believe that one day violence against women and girls will end. I believe that my descendants will live in a world free from sexual violence and domestic abuse and be amazed and horrified that it was ever not so. Because this can’t go on. It can’t. We cannot continue to live in a world where 1 in 3 women are raped, beaten or assaulted. We cannot live in a world where this happens and the majority of the perpetrators are never held to account. So long as we live in this world, women will not have true equality. We will not have true liberation. And that’s why I am fighting for a better world in every way I can. Because this violence has to stop. This has to stop now.