Online abuse and reporting the man who threatened me

This week, feminist activism saw a real success with the announcement that, after Elizabeth Fry departs from the £5 note, Jane Austen will soon grace the noble tenner. This was after a concerted, high profile campaign run by Caroline Criado-Perez highlighting the cultural femicide of women across our society – the invisibility of inspirational women in the public eye and the impact that has on wider inequality.

Whatever your thoughts on the bank notes campaign, and even within feminist circles there is a divergence of views, what we can surely all agree on is that the scale of abuse Caroline has received in the wake of the announcement is absolutely horrifying and appalling. Rape threats and other violent threats have abounded, along with grotesquely sexually violent language. These message from men – and they are all men – are another sad and horrific example of what happens when a woman speaks out about sexism and misogyny, and brings these issues into the public eye. 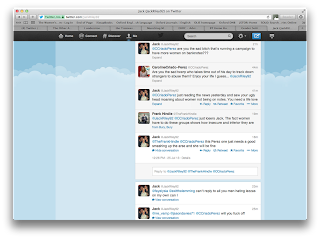 Last February, you may remember, I was in a similar situation. I had been involved in a campaign to try and prevent a Hooters restaurant opening in Bristol. The campaign did not prevent the opening, but not long afterwards the self-styled ‘breastuarant’ closed due to poor management, debts and a lack of custom. I don’t know if the lack of custom had anything to do with our highlighting how bloody sexist the establishment was. But I had no direct responsibility for the closure of Hooters.

Throughout the Hooters campaign I had been subject to some pretty vile abuse. A lot of the insults were mocking my perceived appearance and sexuality, general wishing of violence upon me and people finding ways to insult my family. But when Hooters closed, the abuse stepped up. On Facebook a man wrote that I was a cunt, that he was going to find out where I lived, post my address details online and ‘make me pay’. Other men ‘joked’ about how they hoped I got kicked in the vagina.

I probably wouldn’t have gone to the police but my mum gave me no choice. Like women everywhere, when I am harassed or assaulted offline, or abused online, it doesn’t even register as a crime. It is just something that happens, to you, as a woman, in public space. That space might be a pub or a club, a bus, or Twitter and Facebook. We are so used to the language that degrades us; we are so accustomed to having our aired opinions met with deeply sexist and misogynistic insults that to label it as a crime seems absurd. It’s too common, surely, to be a crime?

But it is a crime. It is. And going to the police to report the threat made online was a real triumph for me. The police were fantastic. They took it seriously – more seriously than I had in my ‘this is just what happens to women’ mode. They listened, and they reassured me that no one deserved to be threatened. They asked me if I wanted to go to court and they respected my decision not to do so. And they went to the guy’s house, gave him a caution which is now on his record and he is not allowed to contact me or the Bristol Feminist Network ever again.

When the police officer visited me after the man had accepted his caution, he told me how my online abuser had said he had never considered the fact that I was a real person. He had never thought that his words could or would hurt me.

I don’t believe this. I think this is what men who write vile abuse online tell themselves to excuse their behaviour. But he knew I was a real person. I exist. The men abusing Caroline know she is real. They just believe they can get away with it, because it’s online and because calling women bitches and slags and cunts and sluts is shrugged off. After all, it happens all the time, so it’s ok.

Well, it’s not ok. It’s against the law. You cannot write online that you want to rape a woman, you cannot write to that woman telling her you’re going to find out where she lives and ‘make her pay’ for being a ‘cunt’. It is a crime.

When I wrote about my experience in the Guardian, the local BBC news website and local paper picked up on the story, reporting how I had gone to the police.

I wasn’t surprised that so many of the comments under these articles ‘argued’ that the abuse was all my own fault. If I had shut up, stayed home, not raised my voice in the public sphere, then I wouldn’t have received these threats. According to many, it was my presence as a woman speaking out about inequality that had caused these men to act in the way they had. It wasn’t their fault for being sexist, potentially violent, misogynists. It was my fault for daring to have a voice.

It’s the same old story. Whenever a woman speaks out about the online abuse she has experienced, there is always a vocal group blaming the woman for that violence. Apparently going to the police showed that I couldn’t ‘take the heat’. Just as I should have shut up in the first place, I also should shut up about being a victim of a crime. I should just take it.

It was as if by being a woman speaking out against sexism, I had forfeited my rights. My daring to have a voice somehow meant in their eyes that I had no legal rights, that I had renounced my rights to live free from threats of violence. It was frightening how little they respected that the law applied to me, just as much as anyone else, no matter what I had said about how retro sexist Hooters is.

The men abusing Caroline Criado-Perez over the last few days don’t care about Austen, or bank notes. They care that a woman has spoken out about sexism and they want to stop her from doing it again.

The men who abused me didn’t care about job losses in Bristol. They were furious that I had spoken up about sexism and they wanted to stop me ever doing it again.

I called the police on my abuser. I believe doing so means he will now think twice before he threatens a woman online again.

I would never tell a woman to go to the police for online threats if she didn’t want to. But I do believe we need to ram the message home that what these men are doing is against the law. If we report their actions, they will receive a criminal record. The men who write they hope you get raped, the men who follow you online, jeering about all the horrific things they want to do to you, the men who call you cunts and bitches – every single time one of them is breaking the law. It is against the law to threaten someone online, just as it is offline.

I don’t know how we bring this message home. The problem I see is that these men don’t believe you when you tell them they’re breaking the law. As my own experience shows with the reaction I had after going to the police – the fact of you reporting it encourages more abuse, gives more men more leverage to abuse you. But reporting it did mean that this one man won’t be threatening women again. And it means, I hope, that I can write this post and prove that threatening women online is a crime. Perhaps that’s something.

Every woman who speaks out receives threats and abuse designed to silence her. Last February it was me, this weekend it’s Caroline Criado-Perez. It’s Bidisha, Laurie Penny, Cath Elliott, Nimko Ali. It doesn’t matter what we talk about – that’s not the concern. It’s the daring to talk in the first place.

But I have a voice. I will use it. Those men couldn’t silence me then and they won’t silence me now. The fact that they keep trying to isn’t good enough. This has to stop.